Income inequality in the U.S. has increased sharply in the past generation. Those who worry about this development do so partly on grounds of fairness and partly because inequality may have adverse effects on politics, health, and crime. Sometimes overlooked is a more immediate cost: slow income growth for a large chunk of the population. 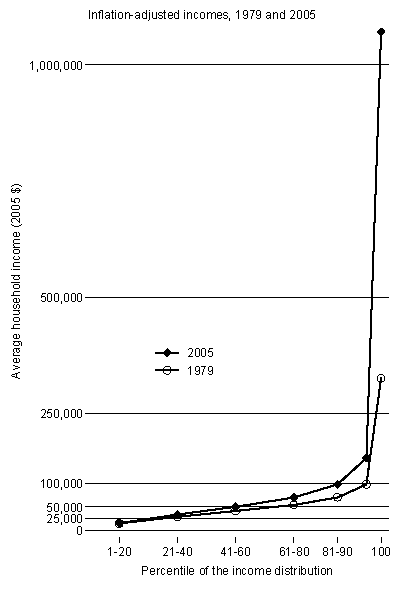 The average income among all households rose at a rate of 1.5% per year over these two and a half decades. But as the chart makes plain, much of that increase went to households at the top of the distribution, especially those at the very top. Households in the bottom three quintiles experienced very slow income growth — 0.2% per year for the poorest quintile, 0.6% for the next, and 0.7% for the middle.

What would 2005 incomes have looked like if income growth had been proportionate rather than heavily skewed in favor of the top — in other words, if all incomes had increased at a pace of 1.5% per year? The dashed line in the next chart shows the answer. To make it easier to see the effect, I include only the bottom 80% of households here. All of them would have been a good bit better off.

It’s often said that progressives focus too much on the distribution of income and don’t pay enough attention to absolute income levels. In fact, its impact on absolute incomes is one of the chief reasons to be concerned about rising inequality.

12 thoughts on “The Cost of Rising Inequality”