Here is the conventional wisdom about income inequality in the United States compared to other rich countries: 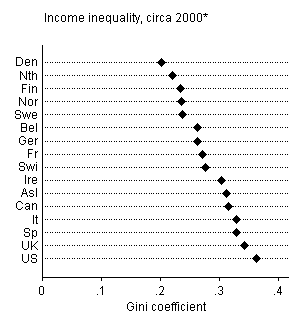 The U.S. is the most unequal.

However, these data are based on households’ income in a single year. Averaging income over multiple years tends to reduce measured inequality. This is because of mobility; some people move up and/or down in the distribution over time. If the United States has more such mobility (relative intragenerational mobility) than other countries, the conventional single-year measure shown in this chart may overstate U.S. inequality relative to other countries.

Does the U.S. improve if we measure inequality using income averaged over a longer period of time?

Markus Gangl (University of Wisconsin), Joakim Palme (Institute for Futures Studies in Stockholm), and I have a paper that averages income over 18 years in Germany, Sweden, and the United States. Eighteen years isn’t a full work life, but it’s the best we can do with existing panel data sets. The following chart shows the findings. As the number of years over which income is averaged increases, the amount of measured inequality decreases. But it decreases at the same rate in each of the three countries. America’s position does not improve. 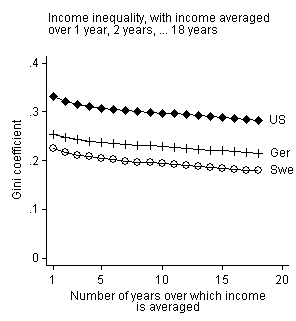 The full paper is here.

* These numbers are my calculations from the Luxembourg Income Study database. To make them as comparable as possible to the data in the second chart here, they’re for households with a head age 25 to 59. Income is with government transfers included and taxes subtracted.

12 thoughts on “Is the U.S. a High-Inequality Country if Mobility Is Taken into Account?”