Homelessness isn’t new in the United States. It has existed since the country’s founding, ebbing and flowing over the years. What’s new is the large number of homeless Americans. Beginning in the early 1980s, there was an observable increase in the number of Americans asking for handouts, sleeping in public places, wandering the streets with their possessions in shopping carts, and searching for food or cans in garbage bins. For the first time in our history, homelessness became a truly public phenomenon. Indeed, it was around this time that the term “homeless” was coined.

As Christopher Jencks notes, “The spread of homelessness disturbed middle class and well-to-do Americans for both personal and political reasons. The faces of the homeless often suggest depths of despair that we would rather not imagine, much less confront in the flesh. Daily contact with the homeless also raises troubling questions about our moral obligations to strangers. Politically, the spread of homelessness suggests that something has gone fundamentally wrong with America’s economic and social institutions.”1

The reasons why particular people end up homeless are varied. A fairly large share (probably more than two-thirds) of homeless adults have some disability or pathology — mental illness, alcoholism or drug abuse, poor physical health, a criminal record — that makes them less able than the average person to survive without help. Many don’t have family who are able or willing to offer them temporary support.2 For more than a few homeless individuals, an event of bad luck — a car accident or breakdown, stolen belongings, a work injury — provides the initial or final push onto the streets. Some people are homeless by choice, though most studies suggest that this accounts for a small percentage.

According to the best available estimate, about half a million Americans are homeless on any given night. Careful counting began only in 2007, but this number is similar to estimates from the mid-1980s and mid-1990s.3 About four-fifths are adults, and one-fifth are children. The National Coalition for the Homeless estimates that about 2 million Americans are homeless at some point during a year, though it isn’t clear how accurate that estimate is.4

Approximately 0.2% of the US population, or two out of every 1,000 persons, are homeless. Since 2007 this share has decreased, as figure 1 suggests. 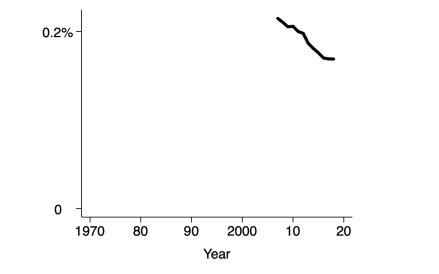 Figure 1. Homelessness
Homeless persons on a given night as a share of the population. Careful “point in time” counting began in 2007. Data source: Department of Housing and Urban Development, The 2018 Annual Homeless Assessment Report (AHAR) to Congress, 2018, exhibit 1.1. The data are from counts taken in the last ten days of January each year.

What caused the rise in homelessness in America beginning in the early 1980s? What has contributed to the decline since the mid-2000s? How can we make further progress?

WHAT CAUSED THE SURGE IN HOMELESSNESS IN THE 1980s?

Several developments in the economy, housing, and government policy beginning in the 1980s put increasing numbers of Americans at risk of becoming homeless.5

Rising unemployment and stagnant pay. The US unemployment rate grew from 5% in 1973 to 7% during the late 1970s to 10% in 1982 and 1983. Studies of homelessness consistently find that unemployment is a precipitant of homelessness for many individuals. And stagnant wages for those in the lower half of the pay distribution meant that even for those with work, the ability to afford housing and feed a family was no longer a given.6

Decline in the stock of low-income housing and inflation in the cost of housing. Between 1973 and 1979, more than 90% of the nation’s housing units renting for $200 or less per month disappeared from the housing market. Many of these were single-room occupancy (SRO) units which had long housed the nation’s poorest individuals. One reason in that new government-subsidized low-income housing units decreased significantly under the Reagan and (George H.W.) Bush administrations. In Austin, Texas, to cite just one example, the median rent jumped from $150 per month in 1976 to $450 in 1985.7

Decline in the real value of welfare benefits. In the 1970s and 1980s, the inflation-adjusted value of social assistance benefits (Aid to Families with Dependent Children, or AFDC) declined significantly.8

Deinstitutionalization. In 1955, about 550,000 patients resided in state and county mental hospitals. By 1980, that figure had shrunk to 140,000, a 75% drop. While deinstitutionalization has been widely blamed as the main cause of rising homelessness, it’s only a partial explanation. Nearly 90% of the decline in mental hospital residency had occurred by 1975. The best estimates put the share of the homeless with serious mental health problems in the 1980s and 1990s at around one-third. That’s not a trivial share, but neither is it an enormous one. Furthermore, even for individuals for whom deinstitutionalization was a precipitant of homelessness, its effect was likely modified or mediated by other factors.

HOW DOES THE US COMPARE TO OTHER RICH DEMOCRATIC NATIONS?

Despite the country’s affluence, Americans at the bottom of the distribution have relatively low incomes.9 And government assistance with housing costs is scarce.10 We might therefore expect more homelessness in the United States than in other rich democratic nations.

Comparable data on homelessness are available for only a small number of countries. They are shown in figure 2. The homeless share is higher in the US than in a number of these nations, but France and Austria have similar levels and Canada’s is a good bit higher. 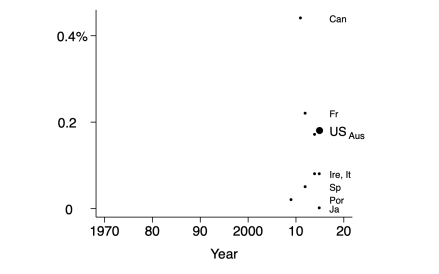 Figure 2. Homelessness
Homeless persons on a given night as a share of the population. 2015. Includes persons (1) living rough, (2) living in emergency accommodation, and (3) living in accommodation for the homeless. Data source: OECD, Affordable Housing Database, table HC3.1.1.

HOW CAN WE HELP?

Being homeless doesn’t automatically mean being without shelter. A host of public and nonprofit agencies exist across the country to provide shelter to persons who lack a home. As figure 3 indicates, about two-thirds of homeless persons are in some type of indoor shelter when the count is done in January each year. 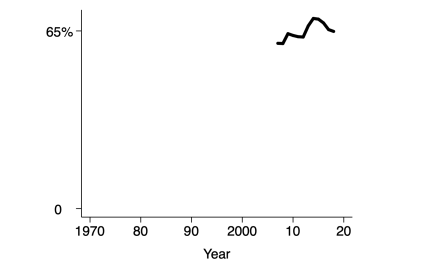 Figure 3. Homeless who have shelter
Share of homeless persons who have shelter on a given night. Data source: Department of Housing and Urban Development, The 2018 Annual Homeless Assessment Report (AHAR) to Congress, 2018, exhibit 1.1. The data are from counts taken in the last ten days of January each year.

Figure 4 shows the number of available beds per homeless person. Since careful counting began in 2007, this number has always equaled or exceeded the number of homeless Americans, and the ratio has increased steadily, reaching more than 1.6 by 2018. The reason a third of homeless persons aren’t in shelters is partly spatial mismatch: the beds may not be where the people are. In other cases it may be because people have overstayed their eligibility at the available shelter, because they’ve been barred for violating rules, or because they voluntarily forgo an indoor bed. 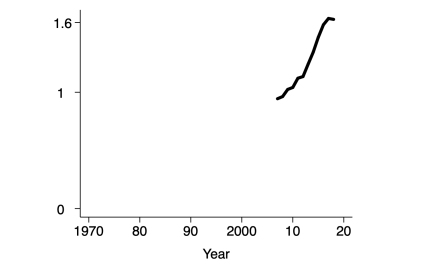 The rise in the number of available beds (figure 4) has come almost entirely in the form of “permanent” housing, as we see in figure 5. According to the National Alliance to End Homelessness, “Moving more people into permanent housing options, as opposed to temporary beds, has become a recognized best practice.”11 Here is one summary of the evidence that underpins this view12:

“The solution, it seems, lies not in publicly sheltering the homeless for sustained periods but in ensuring that they quickly secure their own places to live.

This approach was first applied to the chronically homeless, who made up 16 percent of all cases in 2012. These individuals almost always have disabilities such as mental or physical health problems or addictions. As a result, they fare poorly in conventional homeless programs, which may require compliance with the rules of an emergency shelter — such as sobriety — before allowing them entrance to a transitional shelter. Further compliance, including treatment for substance abuse, for instance, may be required before they can qualify for permanent housing support.

The alternative strategy places the chronically homeless directly into permanent housing while also connecting them to services to address their other challenges. Most will need this support, at government expense, for life. Yet such comprehensive assistance is probably cheaper than leaving the chronically homeless on the streets, because they often end up in hospitals, detox centers or jails, all on the taxpayer’s dime. Those services cost the public $2,897 per individual per month, according to one study in Los Angeles County, versus $605 for supportive housing….

New approaches are also being applied to the situationally homeless — families and individuals who’ve slipped into homelessness because of misfortune such as a job loss, personal turmoil or a costly illness. Traditionally, they have gone from an emergency shelter to a transitional one, where they might spend months working to save the money for moving expenses, a deposit and the first month’s rent on an apartment. Under a new program, authorities instead grant that money upfront, getting the household out of shelter quickly or sometimes even preventing a lapse into homelessness.

Once assisted, people tended to stay housed. Numerous studies showed that only about 3 percent of households served were homeless again within 12 months. Plus, costs per household were much less. A report on efforts in seven states concluded that rapidly rehousing a family costs $5,775 on average, compared with $18,776 for an average stay in transitional housing.” 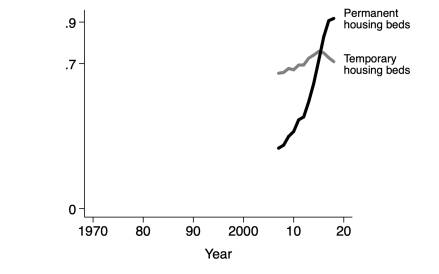 The sharp increase in permanent housing for homeless Americans is likely the main reason why homelessness has decreased steadily since 2007 (figure 1).

Also helpful has been a new government program to reduce homelessness among veterans. The program, as detailed by Binyamin Applebaum, “uses a triage approach, calibrating aid to need. The government provides up to $4,000 in cash for those who need just a little help, for example to pay a security deposit. For those who need continuing help, there are housing vouchers. And for veterans whose economic problems are compounded by other issues, such as disabilities or substance abuse, the government provides ‘supportive housing’ — a place to live, plus counseling and care.”13 This program contributed to a decline in the number of homeless veterans from 75,000 in 2010 to 37,000 at the end of 2019, and it enabled three states and several dozen cities to succeed in providing housing for all of their veterans.

How do we know it isn’t the improving economy that’s driven the decline in homelessness? One reason is that figure 1 above shows there was no sharp rise in homelessness as the economy moved from healthy in 2007 and 2008 to weak in 2009 and 2010.14 Another reason is that financial vulnerability to homelessness doesn’t seem to have decreased since 2007. Figure 6 shows one measure of this: the share of American renters who spend more than 50% of their income on rent. This share has hovered around 2% of the population throughout this period. 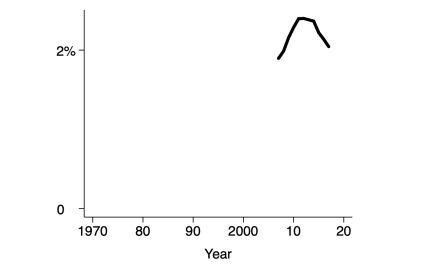 Figure 6. Spend more than half of income on rent
Share of the population. Data source: National Alliance to End Homelessness, State of Homelessness, “Size of Population At-Risk of Homelessness, by Living Situation, 2007–2017,” using data from The 2018 Annual Homeless Assessment Report (AHAR) to Congress.

Approximately 0.2% of Americans are homeless on any given night. Changes in the economy, housing, and government policy caused a sharp increase in homelessness beginning in the 1980s. Since the mid-2000s homelessness has decreased, due largely to a shift toward provision of permanent housing for homeless persons.