How unequal is the distribution of wealth in the United States? How has it changed over time? How does it compare to other rich democratic countries?

Wealth in America is distributed more unequally than income. While the top 1% of households get about 16% of the income in any given year,1 the top 1% of wealth holders have about 33% of the wealth.

The top 1%’s wealth share has increased since the late 1980s, as figure 1 shows. 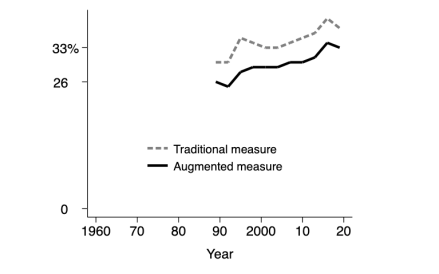 Figure 1. Wealth share of the top 1%
Households. Wealth = assets minus liabilities. The “augmented” measure adds two things not included in the “traditional” measure: the value of defined-benefit pension assets and the estimated wealth of the “Fortune 400” richest families. Data source: Jesse Bricker, Sarena Goodman, Kevin B. Moore, and Alice Henriques Volz, “Wealth and Income Concentration in the SCF: 1989–2019,” FEDS Notes, September 28, 2020, figure B.

On the other hand, wealth inequality did increase sharply in the lower half of the wealth distribution during the housing bubble years. Figure 2 shows average wealth among the middle 20% and among the bottom 40%. For Americans in the middle, many of whom are homeowners, net worth increased significantly beginning in the mid-1990s. For those in the bottom 40%, many of whom don’t own a home, the story was quite different. They experienced no rise at all in wealth.

When the housing bubble popped in the late 2000s, the pattern of wealth inequality changed. As figure 2 shows, average wealth among Americans in the middle 20% fell all the way back to below early 1980s levels. Average wealth among the bottom 40% also dropped, though from an already very low level. All of the increase in wealth inequality within the lower half thereby evaporated.

Those at the top also suffered wealth losses, due to the fall in stock prices during the 2008-09 economic crash. But since then stock prices have risen sharply while home prices haven’t, so wealth inequality between the top and everyone else has increased.3

There is a different data series on wealth inequality in the United States that goes back much farther in time and also allows comparison with several other rich countries. According to these data, shown in figure 3, the top 1%’s share of the wealth decreased in the first half of the twentieth century, then was flat until around 1980, and since then has increased a bit. The three other countries — France, Sweden, and the UK — experienced a similar pattern.4 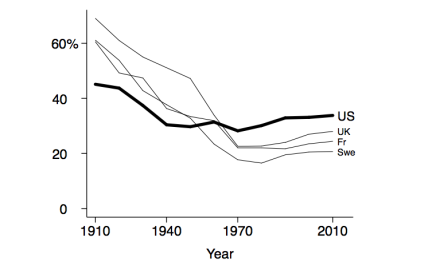 What accounts for the significant reduction in wealth inequality during the first half or two-thirds of the twentieth century? Four developments appear to have been crucial.5

A key part of the story was declines in the value of private assets, which are disproportionately owned by those at the top. Businesses and property were destroyed during the two world wars. Land values fell as economies transitioned from agriculture to manufacturing. The value of businesses and stocks plummeted during the Great Depression. Persistent lack of confidence in the stock market along with new financial regulations and new taxes on dividends and profits kept corporate and stock values relatively low through the 1950s and 1960s. In western European nations, there also was some post-World War II nationalization of formerly private firms.

Second, homeownership rates increased significantly, particularly after the invention of government-backed 30-year fixed-interest-rate mortgage loans in the 1930s. This facilitated wealth accumulation among the middle class.

A third contributing factor was historically rapid rates of economic growth in the 1940s, 1950s, and 1960s, coupled with institutions — strong labor unions, in particular — that ensured a significant amount of this growth trickled down to the middle and lower parts of the distribution via rising wages and employment. This reduced the income share of the top 1%,6 which in turn reduced its grip on wealth.

Fourth, during these decades all affluent countries enacted and expanded new taxes on income, and in some instances on wealth.

Figure 3 shows that while France, Sweden, and the UK began the twentieth century with more wealth inequality than the US, their decline was sharper and it continued for longer, until 1970. As a result, America’s richest 1% today hold a larger share of the country’s wealth than their counterparts in these other nations. The OECD has data for more countries around 2014.7 According to those data, shown in figure 4, the United States has the most top-end wealth inequality of any rich nation, though another source suggests Switzerland is similar or possibly more unequal.8 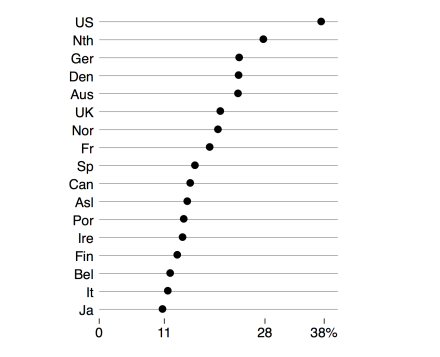 I noted earlier that homeownership and home values have been a key determinant of over-time trends in wealth inequality. When comparing across countries, the best available measure is the share of the population that owns a home outright — that is, without a mortgage loan. This is strongly correlated with the top 1%’s wealth share, as we see in figure 5.9 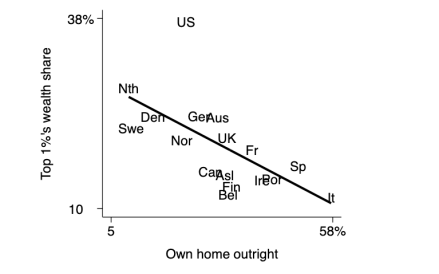 We saw earlier that the bottom 40% of American wealth-holders have, on average, essentially zero net wealth. To gauge the prevalence of low wealth, researchers calculate a measure of “asset poverty,” with the poverty line set at one-fourth of the income poverty line. This tells us the share of people living in households that don’t have liquid assets — assets they can convert relatively quickly into income — sufficient to allow them to have an income above the poverty line for more than three months. Figure 7 shows that in the United States this share is about 55%, which is larger than in most other affluent democracies.

The United States has a top-heavy wealth distribution: around 40% of the wealth is held by the richest 1%. That’s a larger share than in most (perhaps all) other affluent democratic countries. And it’s up from 30% in the late 1980s. Between the mid-1990s and the mid-2000s, the rise in wealth inequality was interrupted by the housing bubble, which boosted home values and thereby net worth for many middle-class Americans. But in the decade since the bubble popped, the rise in inequality has resumed.

The bottom 40% or so of US households have little or no wealth, and that has been true since at least the early 1980s when systematic data collection began.