American exceptionalism is one of our country’s most cherished notions.1 There is considerable truth in it: we are different in a number of respects from the world’s other rich longstanding-democratic nations, a group that includes Australia, Austria, Belgium, Canada, Denmark, Finland, France, Germany, Ireland, Italy, Japan, (South) Korea, the Netherlands, New Zealand, Norway, Portugal, Spain, Sweden, Switzerland, and the United Kingdom. At the same time, there are a host of ways in which we’re quite ordinary.2

To some, “exceptional” doesn’t just mean different; it means best. To others it means worst. As we’ll see, America is both.

Social scientists and journalists often emphasize our problems and shortfalls. That’s helpful, because it spurs us to do better and (hopefully) helps us figure out how. But it can also give us the impression that things are getting worse. Sometimes that’s accurate, but in other instances it’s misleading. In fact, in many areas of life things have been improving and we could be doing better.

Here is a brief and partial introduction to the United States in comparative perspective. Though it barely scratches the surface, it will give you a sense of some of the ways in which the US is both different and similar, both wonderful and woeful, both better than it used to be and worse than it could be.

We have by far the largest population, as figure 1 shows. Along with Canada and Australia, we also have the largest land mass (not shown here).

Our economy, too, is far and away the biggest, according to the standard measure — gross domestic product (GDP). Figure 2 shows this.

Sometimes big is good. Other times it’s not. No one will rejoice at the fact that, as we see in figure 3, the United States has the most obesity of any affluent nation.

WE’RE MUCH, MUCH RICHER THAN IN PRIOR CENTURIES

The extent of human progress over the past two centuries is astonishing. Nowhere is this more apparent than in patterns of economic growth. Economic historians have estimates of gross domestic product (GDP) per person back to the year AD 1 for France and back a few centuries or more for some other countries. For most of the past two thousand years — and by extension, for virtually all of human history — the quantity of goods and services we produced barely budged. Then, in the 1800s, nations such as the United States, Germany, France, and a handful of others stumbled upon an institutional framework featuring markets, government provision of property rights and public goods, and the scientific method. This configuration has proved conducive to rapid and sustained economic advance.

Figure 4. GDP per capita
Adjusted for inflation and converted to 2011 US dollars using purchasing power parities. “k” = thousand. The line that extends back to 1 AD is for France. The data begin in 1500 for Germany and in 1650 for the United States. Data source: Maddison Project Database 2018, rug.nl/ggdc.

Among the world’s affluent longstanding-democratic countries, the US ranks fourth in GDP per capita.

America’s affluence doesn’t trickle down to everyone in a straightforward fashion. As figure 6 shows, the income of US households on the lower part of the income ladder is below that of their counterparts in many comparator nations.

Income gives us only a partial picture of people’s standard of living. To get a more complete sense, we can ask people about their actual living conditions: Are they regularly unable to pay bills? Do they have holes in their walls or cracks in their windows that they’re unable to fix? Is their neighborhood unsafe? And so on. According to the best available data, a larger share of Americans suffer material hardship than is the case in most other affluent countries.

OUR INCOMES ARE THE MOST UNEQUAL

So we’re a fabulously affluent country in which the poor aren’t particularly well-off. That suggests a high degree of income inequality. America is indeed quite unequal, as figure 8, which shows the share of household income that goes to the top 1%, makes clear.

Figure 8. Top 1%’s share of income
This is a measure of income inequality between the top 1% and the bottom 99%. Pretax income. Excludes capital gains. Data source: World Inequality Database. “Asl” is Australia; “Aus” is Austria.

WE’RE MUCH BETTER EDUCATED THAN WE USED TO BE

In the world’s rich democratic nations, educational attainment has been rising steadily for the past 150 years, as we see in figure 9. The United States was the first country to introduce universal public elementary school and then high school.

Figure 9. Education
Average years of schooling completed. Population aged 25 and over. Data source: Max Roser and Esteban Ortiz-Ospina, “Mean Years of Schooling,” Our World in Data, using data for 1870-1950 from Lee and Lee Long-Run Education Dataset, barrolee.com, data for 1950-1990 from the Barro and Lee data set, barrolee.com, and data for 1991ff from the United Nations Development Program, Human Development Report. “Asl” is Australia; “Aus” is Austria.

SOME COUNTRIES HAVE PASSED US IN COLLEGE COMPLETION

A generation ago, the United States had the highest rate of college completion among the world’s rich nations. But since then a number of other countries have caught up and passed us. 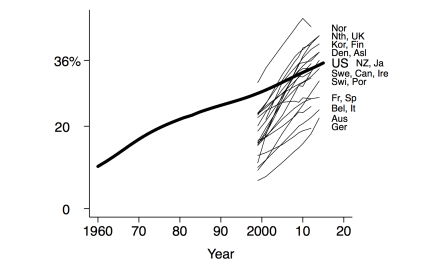 WE SPEND THE MOST ON HEALTH CARE, BUT WE’RE AMONG THE LEAST HEALTHY

America spends a lot of money on healthcare — far more, as a share of our GDP, than any other rich nation. Figure 11 shows this gap.

Despite this massive spending, we don’t live very long relative to our counterparts abroad. In fact, life expectancy in the US is lowest among the affluent countries, as figure 12 indicates. Infant mortality data (not shown here) tell a similar story.

WE PRIZE WORK, BUT ONLY A MODEST SHARE OF US ARE EMPLOYED

Employment is front and center in the American ethos. Yet fewer Americans are in paid work than in many other affluent nations. 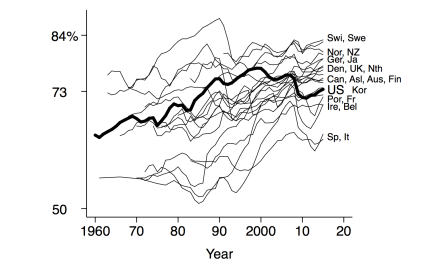 WE EXALT FAMILY, BUT COMPARATIVELY FEW AMERICAN CHILDREN GROW UP WITH TWO PARENTS

The share of American children living with both biological parents and the share living with two parents have each decreased by 15 to 20 percentage points since the mid-1960s. The US stands out — at the low end — among the rich democratic countries. 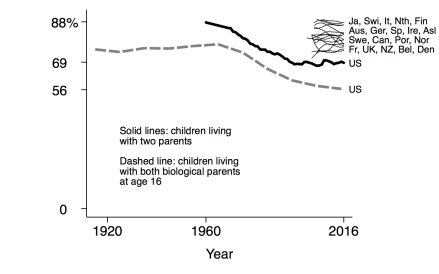 OUR LABOR UNIONS ARE AMONG THE WEAKEST

Labor unions play a significant role in determining wage levels and wage growth in many of the world’s rich countries. In the United States, union membership peaked in the mid-1950s and has fallen steadily since. It has declined in most other rich democratic countries as well, but in the US unionization was comparatively low even at its peak, and that remains true today.

WE HAVE A MODERATELY FREE ECONOMY

Liberty is one of our core values. And yet, according to one measure, displayed in figure 16, our economy is fairly ordinary in the degree to which economic actors are free to choose.

WE’RE THE BIRTHPLACE OF MODERN DEMOCRACY, BUT NOT MANY OF US VOTE

OUR POLITICAL INSTITUTIONS ARE UNUSUAL

Beyond the fundamental similarity of representative democracy, the structure of America’s political institutions is relatively unusual.

OUR GOVERNMENT TAXES AND SPENDS LESS THAN MOST

There are various ways to measure the size of government, but a common one is according to the share of the economy (the GDP) that passes through the government. By the standards of the world’s rich nations, that share is relatively low in the United States.

OUR WELFARE STATE IS COMPARATIVELY SMALL, BUT IT’S MUCH BIGGER THAN IT USED TO BE

People tend to dislike loss. The more income they have, the more insurance they are willing to purchase in order to minimize potential loss. Some types of insurance — insurance against low income in old age, against being unemployed, against having a serious illness or disability, and more — are most effectively provided by government. For this reason, as countries get richer they tend to expand public social (insurance) programs. In the world’s rich democratic nations these programs now account for around 25% of GDP. Even though we lag behind many other countries, our spending has increased quite a bit over the past century. The difference between the leading nations today and the United States today is much smaller than the difference between the US today and the US a century ago.

WE SPEND LESS ON THE MILITARY THAN WE USED TO, BUT STILL MORE THAN OTHER COUNTRIES

Our military spending is the highest among the affluent democratic nations, though it has decreased significantly since the middle of the twentieth century.

WE’RE THE MOST RELIGIOUS

A larger share of Americans say religion is “very important” in their lives than is the case in any other affluent democracy, as figure 22 shows. The share in the US has been declining since 2000, and if that continues it won’t be too long before we join the club of secularized countries. But for the moment we’re still exceptional in this regard.

WE’RE THE MOST PUNITIVE

When it comes to crime and punishment, our approach over the past generation has had more of an Old-Testament flavor than a New-Testament one. As figure 23 shows, we incarcerate a larger share of our population, by far, than any other affluent nation. Part of this owes to the fact that our murder rate is the highest, but murders account for only a small portion of crimes, and our rates of assault, rape, robbery, and other types of crime aren’t particularly high relative to other countries.

America has long been a land of immigrants, a country that, more than any other, welcomed the world’s tired, its poor, its huddled masses yearning to breathe free, in the words of Emma Lazarus’ homage to the Statue of Liberty. Immigration restrictions imposed in the 1920s dampened the embrace, while a reform in 1965 and a partial amnesty in 1986 reopened the door to a significant degree. Where do we stand today? The US is now quite ordinary in its foreign-born population share.

As an open society that prizes individual liberty, America depends, to a certain degree, on our ability to trust one another. Do we? The World Values Survey regularly asks a representative sample of adults whether “most people can be trusted” or “you need to be very careful in dealing with people.” Americans are below average in trustingness, as figure 25 shows.

Our nation’s founding document, the Declaration of Independence, highlights the pursuit of happiness as an “inalienable right” of Americans. How happy are we? A good comparative measure comes from a question regularly asked by the World Values Survey: “All things considered, how satisfied are you with your life as a whole these days?” Respondents are asked to rate their life satisfaction on a scale of one to ten. Relative to our counterparts in other rich longstanding-democratic countries, we Americans are ordinary in our happiness.

Figure 26. Life satisfaction
Scale from 1 (completely dissatisfied) to 10 (completely satisfied). Question: “All things considered, how satisfied are you with your life as a whole these days?” The vertical axis doesn’t begin at zero. Data source: World Values Survey, via the World Database of Happiness, series 122F. “Asl” is Australia; “Aus” is Austria.

America is one of the biggest contributors to climate change. Given the size of our economy, it’s no surprise that our total output of carbon dioxide emissions is much greater than that of any other rich nation. But as figure 27 shows, our emissions are among the highest even when calculated on a per capita (per person) basis. We’ve improved in recent decades, but we need to do much, much better. 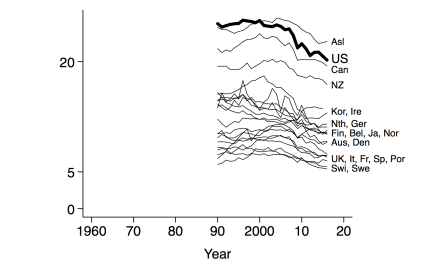