Barack Obama is ahead of Hillary Clinton in the (regular) delegate count, and it looks almost certain that he will remain so when all of the primaries and caucuses are completed. Still, the gap is not large, and it is possible that Clinton will end up with the most popular votes. Rightly or wrongly, it appears that some — perhaps many — of the as-yet-uncommitted Democratic superdelegates intend to take electability into account in deciding which candidate to support (see here, here, and here).

What information should they consider in making a decision?

Partisans and pundits have suggested a number of reasons why one might stand a better chance than the other of defeating John McCain in the general election. Clinton is more strongly despised by conservatives and thus may generate larger Republican turnout. On the other hand, she appears to have stronger support among working-class voters, women, and Latinos, whereas Obama is stronger among professionals and African Americans. If the latter groups are more likely than the former to vote Democratic regardless of who is the nominee, this is an advantage for Clinton. Obama seems more likely to inspire independents, but Clinton may be better prepared to effectively confront Republican attacks. I’m not convinced that these considerations clearly favor one or the other.

National polls pitting Obama or Clinton vs. McCain are another potential source of information. They often show little difference between the two, but it’s too early for them to be of much use.

If I were a superdelegate trying to assess electability, I’d be inclined to focus on which candidate is most likely to win states that are not solidly “blue” or “red.”

The following chart shows the 24 states in which the popular vote in the 2000 and/or 2004 presidential election was within 10 percentage points. The numbers in parentheses indicate the 2000 and 2004 vote results. A plus sign means the Democratic candidate (Gore, Kerry) won the state; a minus sign means Bush won it. The states are ordered by the number of electoral votes they’ll have in the 2008 general election. The markers (“Ob” and “Cl”) indicate the winner of the state’s primary or caucus. 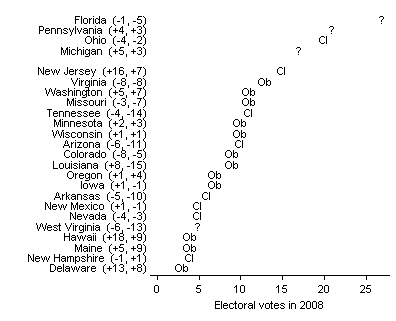 One can argue that perhaps some of these states aren’t truly in play. New Jersey seems likely to go Democratic regardless of who is the nominee, and so too do Hawaii, Maine, and New Hampshire. Similarly, neither Obama nor Clinton is likely to win Tennessee or West Virginia. As best I can tell, though, subtracting these types of states would not change the picture much.

What could change it significantly is if all of the “big four” states — Florida, Pennsylvania, Ohio, and Michigan — go for Clinton. These states have 85 electoral votes between them. They decided the 2000 and 2004 elections, and might well do so again this time. If Clinton were to win these four states, she’d have won in-play states with a total of 141 electoral votes, versus 98 for Obama. Though primary results don’t automatically translate into general election performance (see this and this), this would give her a case for claiming greater electability. Otherwise, it seems to me that electability either is a draw or favors Obama.

Clinton won Ohio. Pennsylvania holds its primary April 22nd. If I were a superdelegate concerned about electability, I would want a true primary result from Florida and Michigan.

Addendum:  Jeff Weintraub has some sensible thoughts on what the Democrats should do about Florida and Michigan.