Income inequality in the United States has increased since the 1970s. Has that increase been offset by mobility?

It could be. Half a century ago Milton Friedman (in Capitalism and Freedom) suggested sensibly that a proper understanding of inequality requires taking mobility into account:

“A major problem in interpreting evidence on the distribution of income is the need to distinguish two basically different kinds of inequality: temporary, short-run differences in income, and differences in long-run income status. Consider two societies that have the same distribution of annual income. In one there is great mobility and change so that the position of particular families in the income hierarchy varies widely from year to year. In the other, there is great rigidity so that each family stays in the same position year after year. Clearly, in any meaningful sense, the second would be the more unequal society.”

Some find the following metaphor (originally from Joseph Schumpeter) helpful. Think of an apartment building with units of varying size and quality. It has a few penthouse suites that are large and feature lots of amenities, a multitude of modest two-bedroom units, and a number of barebones single-room units. This is inequality. Suppose, however, that the residents regularly switch units. Most people live much of the time in the low- or mid-level units, but they go back and forth between these, and many occasionally get to live in a penthouse suite. This is mobility. (Specifically, it’s relative intragenerational mobility.) This mobility reduces the amount of inequality — true, genuine, long-run inequality — among the residents.

Income mobility does reduce income inequality. When inequality increases, however, mobility has to also increase if it is to offset that rise in inequality.

This is a simple, perhaps obvious point. But it’s an important one. The rest of this post illustrates it with the aid of some graphs.

To begin, imagine 100 households at two points in time. Suppose, for simplicity, that there are five different incomes in the society at time 1 and one fifth of the households have each of these incomes. (It’s not important for the illustration, but the incomes I use in these charts are the average after-tax incomes of the five quintiles of the U.S. income distribution in 1979 and 2005. The data are here.)

In one scenario, shown in the first chart, no household’s income changes from time 1 to time 2. Each household’s average income is therefore the same as its income at each point in time. “True” inequality — inequality when income is averaged over time 1 and time 2 — is the same as single-point-in-time inequality.

In another scenario, depicted in the second chart, the income levels stay the same at the second point in time. The level of single-point-in-time inequality is thus the same at time 2 as at time 1. But some of the households switch places. Some that start with the lowest income move up to the lower-middle, others to the middle, and a few to the top two incomes. Similarly, some that begin at the top stay there, while others move down. 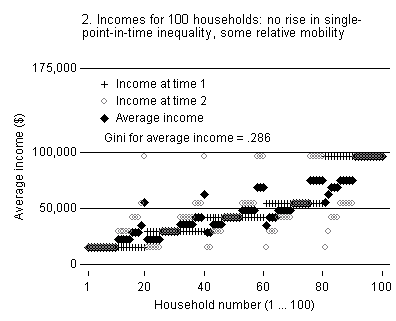 Now consider what happens when single-point-in-time inequality increases from time 1 to time 2, as has happened in the United States since the 1970s. 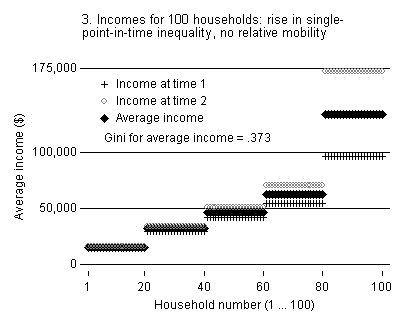 Can mobility offset this rise in inequality? The fourth (and last) chart shows a scenario in which single-point-in-time inequality increases exactly as it did in the third chart but there is relative mobility. The amount of mobility is the same as in the second chart; the same number of households move up or down among the quintiles and by the same (relative) amount.

Mobility does reduce “true” inequality compared to the no-mobility scenario depicted in the third chart. But the Gini coefficient for the fourth chart is much larger than for the second chart. These two scenarios have the same amount of relative mobility. But with single-point-in-time inequality having risen in the fourth scenario between time 1 and time 2, the same degree of relative mobility does not produce the same amount of “true” inequality (inequality of average income).

The bottom line: Income mobility helps to reduce income inequality. But if single-point-in-time inequality rises, mobility can only offset that rise if it too increases.

Single-point-in-time income inequality has risen sharply in the United States since the 1970s. Has mobility increased too? Stay tuned.

5 thoughts on “Can Mobility Offset an Increase in Inequality?”