Much of Barack Obama’s economic policy rhetoric is aimed at middle-class insecurity and anxiety, rather than poverty. On political grounds this is hardly surprising; there are a lot more middle-class voters than poor ones. And in the current economic climate, it seems reasonable. But his platform does include a variety of proposals that are likely to improve living standards for those at the low end of the income distribution. A few highlights (details here):

Obama’s health care proposal would extend affordable coverage to the 15% or so of Americans currently without it, many of whom are just below or a bit above the poverty line. And it would reduce health insurance costs for many who currently have it.

He proposes to raise the minimum wage to $9.50 per hour in 2011 and index it to inflation. The following chart shows what that looks like in historical context (in today’s dollars and assuming an inflation rate of 2.5% over the next few years). Obama’s minimum wage would be pretty high, and indexing it would mean no more lengthy periods — such as 1981-1990 and 1997-2007 — of steady decline in its real value.

Obama would increase the Earned Income Tax Credit for working Americans with no children and for those with three or more children, though it isn’t clear by how much. As the next chart shows, the maximum EITC for those without kids is paltry at present, and families with more than two children get the same amount as those with two. 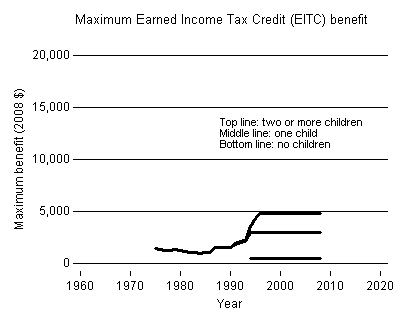 He also proposes a “Making Work Pay” tax credit of up to $500 per person or $1,000 per couple. This would be a rebate on the Social Security payroll tax (6.2%) paid on the first $8,100 of earnings. Like the EITC, a strength of this proposal in both policy and political terms is that it creates no work disincentive.

My preference would be for a bit smaller increase in the federal minimum wage and that the “Making Work Pay” tax credit money instead be used for an across-the-board increase in the EITC. Still, there is little indication from the historical record that a minimum-wage hike to $9.50 would reduce employment. And the “Making Work Pay” tax credit is attractive politically because it’s easier to pitch as a tax cut and because all middle-class earners will be eligible for it, whereas the EITC is available only to households with incomes up to about $40,000.

According to the Obama campaign, about three-quarters of low-paid private sector employees get no (zero) paid sick days from their employer. He proposes to require all employers to provide seven paid sick days per year.

Obama proposes $10 billion in federal government spending to encourage and assist state efforts to expand early education for kids age zero to five. High-quality preschool is doubly beneficial from an antipoverty perspective: it facilitates employment by parents in low-earning households, and it tends to improve cognitive ability and noncognitive skills in kids from poor families.

A refundable (available even to those who don’t owe federal income taxes) tax credit would provide $4,000 toward college tuition, in exchange for 100 hours of public service work per year. This is about two-thirds of the average cost of tuition at a four-year public university.

There is more, including money for job placement, career pathways, transportation to work, community revitalization, and others. But the proposals I’ve highlighted would, if actually enacted in the next four (or eight) years, represent considerable progress in addressing poverty in America.

John McCain’s proposals? Well, search his campaign’s website and see what you find.