If Barack Obama wins the election, many analysts will attribute his victory to campaign strategies and events: Obama’s money advantage, the Obama campaign’s superior organizing effort and execution, the candidates’ debate performances, McCain’s choice to go negative relatively early, McCain’s message incoherence, and McCain’s choice of Sarah Palin for vice president, among others.

Meanwhile, Doug Hibbs’ “bread and peace” model predicts a popular vote share for the incumbent-party candidate (McCain) of 46.25%. This translates into about a 7-percentage-point win for Obama, which is almost exactly what poll averages compiled by Pollster.com, RealClearPolitics.com, and fivethirtyeight.com are suggesting as of today.

The Hibbs model is striking for its simplicity — its predictions are based on a single indicator of economic performance, supplemented by one foreign policy measure (see here) — and its effectiveness. The model’s track record since 1952 and its prediction for this year look like this: 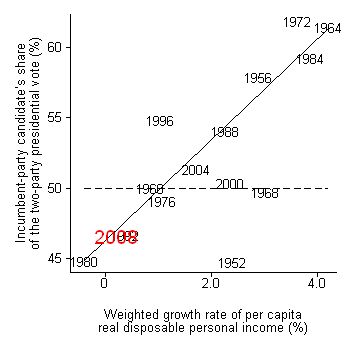 As Brendan Nyhan points out, other predictions based on the “fundamentals” are in the same ballpark.

Campaigns surely do matter, but probably less, in this year and quite a few others, than we tend to think.

6 thoughts on “Elections, Campaigns, and Fundamentals”