Trade, outward foreign investment (movement of plants and services abroad), and immigration very likely have contributed to the growth of U.S. earnings inequality over the past several decades. Reducing any or all of them might well help to boost wages among Americans in the lower half of the distribution.

But in my view this shouldn’t be even a minor part of a strategy for inequality reduction, much less its chief focus. Trade, investment abroad, and immigration tend to benefit citizens in and from poor countries, which includes the bulk of the world’s population. Most of these people are substantially poorer than even the poorest Americans.

Yes, globalization enriches some rapacious corporations and despotic rulers, and vulnerable workers are exploited. But access to the American market and to employment by U.S.-based transnational firms has helped improve the lives of hundreds of millions of Chinese, Indians, and others in recent decades. And moving to the United States almost invariably enhances the living standards of immigrants from poor nations. It would be a bitter irony if American progressives succeeded in making a real dent in our inequality problem at the expense of the world’s poorest and most needy. We should look elsewhere for solutions.

I’m not suggesting we should sit idly by and let globalization have its way with the Americans who lose their jobs or experience falling wages. But rather than try to slow or block globalization, we should instead do what we can to enhance their flexibility and adaptability and to provide adequate cushions and supports. Among the things we Americans can learn from the Danes, Swedes, and Dutch, one of the most valuable is that it’s possible to embrace globalization (and other sources of economic change and disruption) and still have a high-opportunity, low-inequality, low-poverty society. The following chart offers one indication of this. It shows earnings inequality by imports as of the mid-2000s. Import-heavy countries are by no means doomed to high inequality. 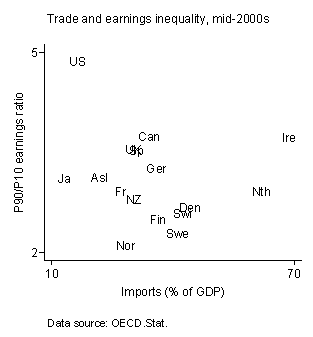 Most of us want policies like wage insurance, better unemployment compensation, portable health insurance and pensions, support for retraining, and assistance with job placement not just because they can help to blunt the adverse consequences of globalization, but because they do so for economic change in general — whether it’s a product of technological progress, geographical shifts of industries and firms within the United States, or what have you. Arguing for limits on globalization directs attention away from these policies, making their adoption less likely. Paradoxically, then, we end up with the worst of both worlds: marginal trade limits, half-hearted steps to curtail investment abroad, confused and ineffective immigration policy, and too little of the supports and cushions needed for successful adjustment.

If you don’t like my take on this, consider what the following have to say before you make up your mind: Alan Blinder, Paul Collier (ch. 10), Brad DeLong, James Galbraith, Nicholas Kristof, Paul Krugman, Dani Rodrik (ch. 9), Amartya Sen (ch. 4), Gene Sperling, Joseph Stiglitz (ch. 3).

15 thoughts on “Reducing inequality: put the brakes on globalization?”