In a new CEPR report, John Schmitt, Hye Jin Rho, and Shawn Fremstad note that while the U.S. unemployment rate had been lower than those of many rich European countries in the 1980s and 1990s, it now has caught up to and surpassed most of them. In March of this year our unemployment rate was tied for fourth-highest among the major OECD nations. This, they say, “has turned the case for the U.S. model almost entirely on its head.” (Floyd Norris in the New York Times and John Quiggin at Crooked Timber have also picked up this story.)

I’m sympathetic to the conclusion, but I’d prefer it to be based on a different measure of labor market performance.

The unemployment rate is calculated as the number of people looking for work but without a job (unemployed) divided by the number of people either employed or unemployed. Its weakness is that it takes no account of people who aren’t seeking work because they doubt they could find a satisfactory job or have given up trying. The U.S. Bureau of Labor Statistics has broader unemployment measures that try to incorporate this, but there aren’t cross-nationally comparable data for those measures.

If our interest is in an economy’s success in creating jobs, a better indicator for cross-country comparison is the employment rate: the share of working-age people (age 15 to 64 is the standard) that are employed. The following chart shows employment rates for the two most recent business-cycle peak years: 2000 and 2007. The U.S. is one of just a few nations in which the employment rate declined during this period, though it’s in the middle of the pack rather than at the bottom. 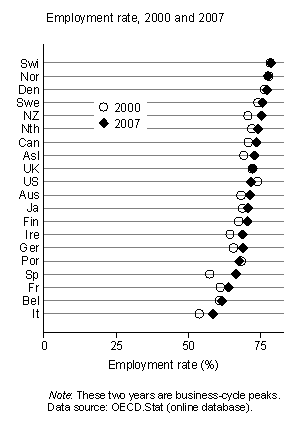 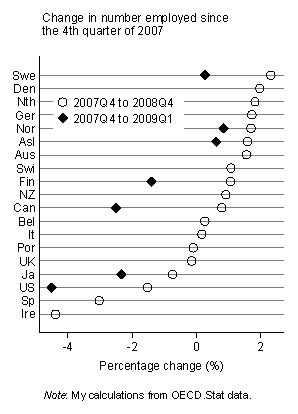 The American labor market hasn’t been the worst at creating and maintaining jobs in the 2000s (though bear in mind that we’re talking here solely about the number of jobs, not their quality). Yet as Schmitt, Rho, and Fremstad rightly suggest, things have changed sharply relative to the 1980s and 1990s when our performance was near the top of the comparative heap.

11 thoughts on “How does the U.S. labor market compare now?”