Today came the official announcement that José Mourinho will take over as coach of Real Madrid. Given Mourinho’s record of success in winning domestic league and Champions League trophies, I presume this comes as good news to many Real fans. But as a soccer spectator, I’m not especially happy about it.

Real has two of the best attacking players in the world in Cristiano Ronaldo and Kaka, and a strong nucleus around them. This year’s Real team played with an attacking style that was fun to watch. In Spanish league competition it scored far more goals than its recent predecessors.

I suspect this will change under Mourinho. His preferred style is counterattack. That’s how his Inter Milan teams of the past two years have played, and it’s the way his Chelsea teams of the mid-2000s tended to play, despite their wealth of offensive talent. Mourinho’s Chelsea did use an offensive-looking 4-3-3 formation. But a team’s formation matters less than its strategy on the field, and the main thing Mourinho added to Chelsea when he arrived in 2004-05 was a defensive-minded counterattacking style. The club’s goal record bears this out. Chelsea upped its scoring slightly in the first two of Mourinho’s three seasons, but its chief improvement was in allowing fewer goals. 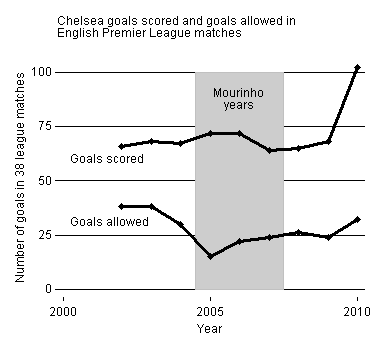 Real Madrid were successful this year, but not successful enough. Their record in the Spanish league was one of the best ever: 31 wins, 3 draws, 4 losses. Yet they finished second to Barcelona. In the Champions League, Real slipped up in the round of 16. Mourinho has been brought in to do better. And he might. Make no mistake: counterattack can be an effective strategy. It’s no accident that the Italian national team, a consistent practitioner,  has won two of the last seven World Cups, reaching the semifinals two other times. And the only teams to fare well against Barcelona in the Champions League the past three years — Manchester United in 2008, Chelsea in 2009, Inter Milan this year — did so via a cautious, defensive approach.

As a spectator, though, I much prefer teams willing to play genuinely attacking soccer. This year’s Chelsea team, for instance, was more enjoyable to watch than its Mourinho-era counterparts, with many of the same players.

Few teams have the talent to thrive with an attacking style. The current Real squad is one that does. It would be a pity to waste it. Perhaps at Real Mourinho will change his stripes, but I’m not optimistic.