Reducing poverty is widely viewed as a key objective of a good society. The U.K.’s Labour government set a formal poverty reduction target in the late 1990s, and the European Union recently did so as well. In the United States, public opinion surveys consistently find a solid majority saying government spends too little money on assistance to the poor.

The standard poverty measure in comparisons of rich nations is a “relative” one. The poverty line for each country is set at a percentage, usually 60% or 50%, of that country’s median household income.

Which countries have been most successful in reducing relative poverty in recent decades? And how have they done it? Here’s what the picture looks like for twenty affluent nontiny longstanding democracies. The data are from three sources: the Luxembourg Income Study (LIS), considered the most reliable for comparative purposes; the European Union’s Statistics on Income and Living Conditions (EU SILC), which covers recent years for EU countries; and the OECD. 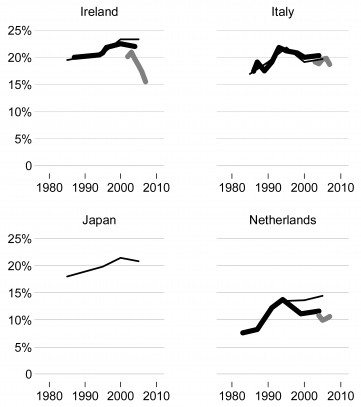 As it turns out, there is hardly any success to explain. In almost every one of these nations the relative poverty rate was no lower in 2007, the peak year of the pre-crash business cycle, than at the end of the 1970s. The only clear exception is Ireland. Denmark also reduced poverty according to the LIS data, but the OECD data suggest little or no change. Portugal is another possibility. A few countries succeeded in reducing relative poverty during certain portions of this period, such as the U.K. in the early 2000s.

What accounts for this near-universal failure?

A relative measure of poverty is essentially a measure of inequality in the lower half of the income distribution. A nation’s relative poverty rate is determined largely by three things: wage inequality among individuals in the bottom half of the distribution, employment inequality among households in the bottom half, and the generosity of the public safety net. The wage distribution has become more unequal in many countries, though by no means all. This owes to a host of developments, including globalization, deregulation of product and labor markets, manufacturing decline, weakening of collective bargaining, and increased immigration of people with language barriers and/or limited job skills. The trend in employment likewise has tended to be inegalitarian, depending on the magnitude and character of the rise in single-adult households, the movement of women into jobs, and government efforts to promote employment. Government transfers have increased in a number of countries, but often only enough to offset the rise in market inequality. And in a few nations transfers have stagnated or decreased. (More discussion here, here, here, here, and here.)

I prefer a focus on absolute incomes and living standards rather than on relative poverty, and that approach yields a very different conclusion about progress in recent decades. Still, the widespread failure of rich countries to make any headway in reducing relative poverty rates is striking.