The Bush tax cuts of the early 2000s reduced the progressivity of federal taxes, but not that much. The chart below shows the effective federal tax rate for each quintile of households and for the top 1% in the business-cycle peak years of 2000 and 2007. The tax rate dropped by a similar amount for each quintile, and only slightly more for the top 1%. (For more discussion and analysis, see pages 24-31 of this CBO report.) 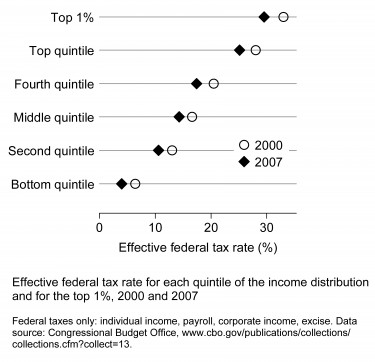 What should we make of this? On the one hand, it’s good that there was little reduction in progressivity. The progressivity of federal taxes helps to offset the regressivity of state and local sales taxes.

On the other hand, there was a compelling case in the early 2000s (and still today) for increasing the progressivity of federal taxes. One of the chief rationales for progressive taxation is that those with high income can afford to contribute a larger share of that income. In the 1980s and 1990s, the top 1% of Americans enjoyed whopping income gains. Between 1979 and 2000,  the average (inflation-adjusted) income of households in the top 1% jumped from $350,000 to $1 million. For households in the bottom 20%, average income barely budged; it was $15,300 in 1979 and $16,500 in 2000. Given these developments, it would have been sensible to increase the effective tax rate a bit for those at the top and perhaps reduce it a little for those at the bottom. President Bush and the Congress instead chose to reduce rates for everyone.

The chief harm inflicted by the Bush tax cuts wasn’t to progressivity. It was to government revenues. The average effective federal tax rate for all households dropped from 23% in 2000 to 20.4% in 2007. Judging from the CBO’s data on income, that two-and-a-half percentage point decline subtracted roughly $300 billion from federal tax revenues in 2007. Proponents of the tax cuts hoped the economy would grow faster, mitigating the revenue loss caused by the lower rates, but that didn’t happen.

$300 billion a year wouldn’t address all of our revenue needs, but it could do a lot of good.

3 thoughts on “Were the Bush tax cuts worse for progressivity or for revenues?”