Gerald Friedman forecasts that if Bernie Sanders’ full set of policy proposals were enacted in early 2017, America’s GDP per capita would grow at a rate of 4.5% over the decade from 2016 to 2026. Is that plausible?

Figure 1. Growth rates of GDP per capita in 20 affluent countries
Average growth rate of inflation-adjusted gross domestic product per capita. The countries are Australia, Austria, Belgium, Canada, Denmark, Finland, France, Germany, Ireland, Italy, Japan, the Netherlands, New Zealand, Norway, Portugal, Spain, Sweden, Switzerland, the United Kingdom, and the United States. The data for 1900-1970 are from Angus Maddison, ggdc.net/maddison/oriindex.htm. The data for 1970-2014 are from the OECD, stats.oecd.org, National Accounts. The last two periods are business cycles rather than decades.

Figure 1 shows growth rates by decade for the world’s 20 rich longstanding-democratic nations since 1900. Only a handful of countries have achieved a growth rate of 4.5% or better over a full decade:

This is the basis of the widespread skepticism about Friedman’s forecast (Krueger-Goolsbee-Romer-Tyson, Krugman, DeLong).

But others (Klein, Mason, Konczal) point out that the 2008-09 economic crisis and sluggish recovery have left the American economy with a sizable output gap. GDP per capita fell well below its pre-2008 trend, and it remains well below. As figure 2 shows, after past recessions the economy has tended to sooner or later spring back up to the trend line. That includes the Great Depression. In the 1940s, GDP per capita increased at a rate of 3.9% (the closest we’ve gotten to 4.5%, as figure 1 indicates), eventually returning to the pre-Depression trend. 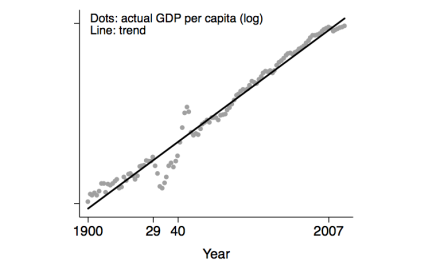 How did that happen? A key part of the story was the war effort from 1940 to 1945, which served as a massive economic stimulus package, boosting demand and economic growth. Friedman’s 4.5% growth forecast for 2016-26 hinges on the notion that Bernie Sanders’ policy package would achieve something similar.

Would it? My reading of Friedman’s paper is that the 4.5% number should be treated as an upper-bound estimate. It’s what could conceivably happen in the most optimistic scenario, rather than what’s most likely to happen. I’d want to see a lot more sensitivity analysis before giving that number any real credence.