“Today’s problems have less to do with the size of the economic pie than the way it is divided.” This, according to a New York Times article, is what Hillary Clinton’s economic advisers believe. I’m certain John Edwards’ economic team would agree with the statement, and I suspect Barack Obama’s would too.

Is this a sensible view? That’s a large question, but here is one way to think about it. The solid lines in the following chart show trends since World War II in inflation-adjusted incomes of families at the 60th, 40th, and 20th percentiles of the income distribution. The data are from the Census Bureau (here). 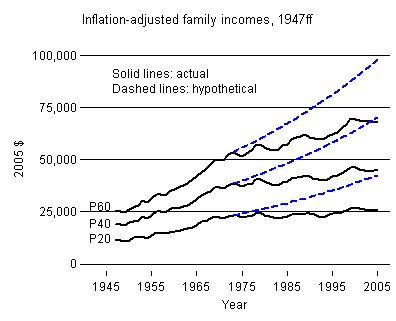 From 1947 to 1973, incomes at each of these three levels grew at an annual rate of about 2.7%. That was approximately the same as — actually slightly faster than — the rate of growth of the economy as a whole; GDP per capita during that period grew at a rate of 2.5% per year.

The dashed lines in the chart show what incomes at the 60th, 40th, and 20th percentiles would have looked like had they grown at the same 1.9%-per-year pace as the economy since 1973. The difference is striking. Incomes for a very large swath of the American population would be much higher — $15,000 to $30,000 higher — if economic growth since the mid-1970s had been distributed more equally.

Some will respond that the heavily skewed distribution of post-1973 economic growth contributed to that growth. In other words, the pie would now be smaller if those below the top had gotten more of it during the past generation. If you believe that, see this post.

4 thoughts on “Size of the Pie, Distribution of the Pie”