“When you cut the highest tax rates on the highest-income earners, government gets more money from them.”

This sounds like an argument by Arthur Laffer, probably on the Wall Street Journal op-ed page circa 1978. Actually, it is by Arthur Laffer … in the Wall Street Journal … but in 2008 rather than 1978. The piece is titled “The Tax Threat to Prosperity” (here). In it, Laffer reiterates his famous, and famously-influential, claim about the detrimental impact of tax rates on incomes and therefore on tax revenues.

But the argument has changed. The notion at the heart of the original “Laffer curve” argument was that higher marginal tax rates on those making the most money discourage them from investing, starting new businesses, and working hard. The result is less income growth, and hence lower tax revenues. Laffer now argues that the problem with high marginal tax rates is that they encourage high earners to hide and shelter their income. The “supply-side” problem now is said to be tax avoidance.

What is the evidence? Laffer notes that while the top marginal income tax rate has been significantly altered over the past generation, the effective tax rate — the share of income actually paid in taxes — for the top 1% of households has been fairly stable. The chart below shows this. (The data on effective tax rates are from the Congressional Budget Office here.) This, he says, is because when the top marginal rate is increased, high-income taxpayers reduce their taxable reported income via “tax shelters, deferrals, gifts, write-offs, cross income mobility, or any of a number of other measures.” When the top marginal rate is reduced, they increase their taxable reported income. 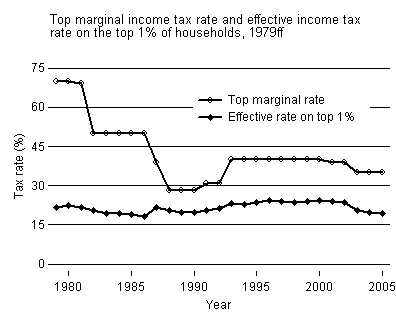 This is certainly plausible. But it is equally plausible that the effect on tax avoidance, while real, is quite small. Suppose the top marginal tax rate is reduced by 10 percentage points. Is it likely that most of those in the top 1% will call their accountants and instruct them to go easy on the exemptions and deductions?

There are have been four noteworthy changes in the top marginal tax rate since the late 1970s. Let’s consider them in turn.

1. Tax reform in 1981 reduced the top marginal rate from 70% to 50% beginning in 1982. Few exemptions and loopholes were closed. The fact that the effective income tax rate on the top 1% of households fell only slightly in the ensuing years appears to support Laffer’s argument.

But there are two important qualifications. First, the drop in the top marginal rate is misleading. As Eugene Steurle points out in his book, Contemporary U.S. Tax Policy, “Even before 1981, high-income individuals often avoided a top tax rate of 70 percent through a special provision of the tax code that limited the tax rate on earnings, or income from labor, to a maximum of 50 percent.” Furthermore, in 1982, 1983, and 1984 additional tax reforms were enacted that reduced loopholes and enhanced tax compliance and collection via expanded reporting requirements and heightened penalties.

2. Tax reform in 1986 reduced the top marginal rate from 50% to 39% in 1987 and 28% beginning in 1988. The effective rate on the top 1% actually increased slightly in the following years. This, however, is fully explained by the fact that the 1986 reform dramatically reduced loopholes and exemptions. This wasn’t a case of high-income households deciding to hide less of their income because the top marginal tax rate had been lowered. They had no choice. 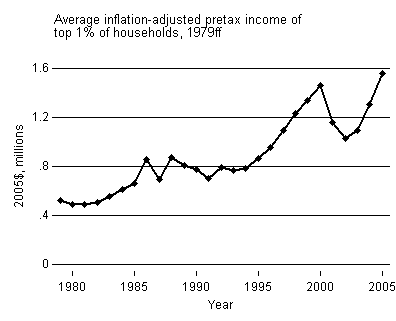 None of this is to suggest that tax avoidance doesn’t occur or isn’t worth worrying about. Far from it. But the notion that lowering the top marginal tax rate dramatically reduces such avoidance appears to be wishful thinking.