Douglas Hibbs’ “bread and peace” model has been extremely effective at predicting the outcomes of U.S. presidential elections. This chart, covering elections from 1952 to 2004, gives you the gist: 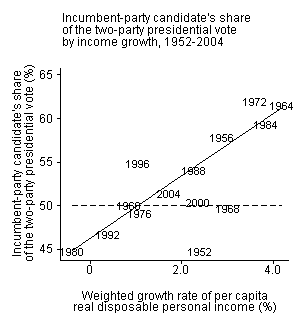 On the vertical axis is the incumbent-party candidate’s share of the two-party vote. On the horizontal axis is the growth rate of per capita real disposable personal income (DPI) over the three and a half years leading up to the election. The growth rate is adjusted so that more recent periods (quarters) are weighted more heavily. Income growth — “bread” — is a strikingly good predictor of the vote outcome.

There are two main exceptions: 1952 and 1968. (These aren’t included in calculating the regression line in the chart.) This is where the “peace” component of the model comes in. In those two years the incumbent (Democratic) party suffered from a large number of American casualties in a war for which it was viewed as responsible — Korea in 1952 and Vietnam in 1968. Those two wars were still relevant in the ensuing elections, in 1956 and 1972, but the incumbent (Republican) party didn’t suffer much because it hadn’t started the wars.

In analyses in a 2000 article and a recent update (here; hat tip to Andrew Gelman), Hibbs finds that other factors neither add to the explanatory utility of the bread and peace model nor reduce the estimated impact of income growth and war casualties.

What does the model predict for the 2008 election? It’s early yet, but nevertheless interesting to take a look. Through the end of 2007, Hibbs’ weighted income growth rate measure is 1.4% (my calculation). If that continues and “bread” dominates, as it has in most prior elections, the model projects a victory for the Republican candidate. The next chart shows this as “2008a.”

Surprised? Many citizens and pundits expect a Democratic victory. And seemingly with good reason. The current Republican president is extremely unpopular, the Democrats did very well in the 2006 mid-term elections, Democratic voters appear to be more energized than their Republican counterparts, and the two issues voters say are most important to them, the economy and the Iraq war, seem likely to favor the Democratic candidate. Still, some recent polls (such as this and this and this) suggest a Republican nominee might well defeat either Hillary Clinton or Barack Obama in the general election.

Lots of things could result in a Democrat winning in November. In the context of the Hibbs model there are three relevant scenarios.

Another possibility is that the model no longer works well. You can see in the first chart above that 1996 and 2000 are not predicted very well by income growth, and unlike 1952 and 1968 they cannot be explained by war casualties. The model predicts 2004 accurately, but perhaps that is a fluke, due to fear of terrorism and the incumbent president’s at-that-time seemingly successful prosecution of the Afghanistan and Iraq wars.

Why might the model no longer work well? One hypothesis is that as a society gets richer, pocketbook issues recede in importance for voters.

A second consideration is that growth of per capita personal income is no longer a useful indicator of how voters have fared economically. In recent decades the bulk of income gains have gone to a small slice of the population — those at the top of the distribution. Measuring growth via an average misses this. The next chart illustrates the point. From the late 1940s through the mid-1970s per capita (i.e., average) DPI and median family income both increased steadily. Since the mid-seventies per capita income has continued to do so, but median family income has been relatively flat.

If the model’s effectiveness has indeed declined, other factors may matter more in 2008 than they have in the past. Which factors? And with what outcome? Your guess is probably as good as mine.