For most left-of-center Americans, the paramount concern with respect to taxes is progressivity. The aim: reduce income inequality. The means: raise income tax rates for the rich and/or lower them for the poor.

A look at the experiences of other affluent nations suggests consideration of an alternative — though by no means antithetical — strategy.

The following chart shows the amount of inequality reduction achieved by taxes and by government transfers (social security payments, unemployment benefits, the Earned Income Tax Credit, and so on) in the United States and nine other rich countries. The calculations are mine, using data from the Luxembourg Income Study database, which provides the best available comparative data on incomes. Inequality is measured using the Gini coefficient. I calculate inequality in each country using household incomes before and after taxes are subtracted; the difference between the two is the amount of inequality reduction achieved by taxes. I do the same for government transfers. Being farther to the right in the chart indicates greater reduction of inequality. 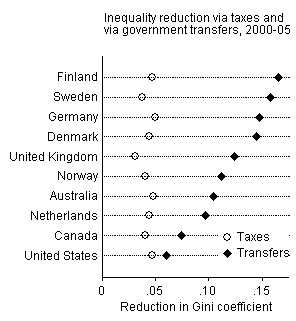 None of these countries achieves much inequality reduction via taxes. Instead, to the extent inequality is reduced, it is mainly transfers that do the work.

The chief contribution of taxes to inequality reduction is indirect. Taxes provide the money to fund the transfers that reduce inequality. The next chart shows this. On the horizontal axis is a measure of the quantity of taxation: tax revenues as a share of gross domestic product (GDP). On the vertical axis is the measure of inequality reduction via government transfers used in the first chart above. Not surprisingly, countries that significantly reduce inequality via transfers tend to tax more heavily.

What lesson should Americans draw for tax reform? In my view, the key one is that a national consumption tax — as a supplement to the income tax, not a replacement for it — is worth serious consideration (see more here and here and here).

The drawback is that consumption taxes tend to be regressive; because the poor (by necessity) spend a larger fraction of their income than the rich, they pay a larger share of that income in consumption taxes. Yet the degree of regressivity is a political choice. It can be greater or lesser, depending on whether certain items, such as food, are exempted.

A national consumption tax (we currently have state and local sales taxes) would help to raise revenue. As the following chart shows, one way other affluent nations generate more tax revenues than the United States does is by making greater use of consumption taxes.

One possibility to consider: a national consumption tax on the order of 5% that is earmarked to fund universal health care, universal preschool, and/or high-quality child care. This would reduce the progressivity of the tax system somewhat, but the payoff might well be worth it.

47 thoughts on “Taxes and Inequality: Lessons from Abroad”