With an incoming Democratic president, should we expect some reversal of the rise in income inequality that has characterized much of the past generation? The following chart, from Larry Bartels’ book Unequal Democracy, suggests reason for optimism. Using Census Bureau data covering the period from 1948 to 2005, Bartels finds a much more egalitarian pattern of income growth under Democratic presidents than under Republican ones. 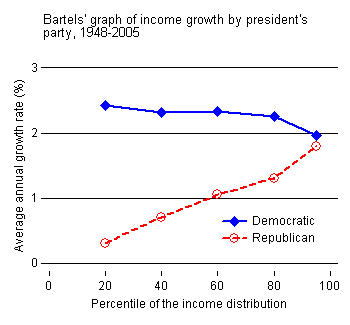 Bartels’ book is social science at its best: careful empirical research on questions at the forefront of current political and policy debate. His finding of a strong association between president’s party and income inequality is just one of the many interesting and important ones in Unequal Democracy.

Is it correct? The story struck me as convincing for the period through the end of the 1970s, but less so for the years since then. So I went to the data. Here’s a summary of my conclusions:

Bartels’ account of the first portion of the post-World War II era seems to me compelling. From the late 1940s through the 1970s, Democratic and Republican presidents tended to have sharply contrasting fiscal and monetary policy orientations. This difference in policies appears to have contributed to sizable differences in income growth for families at various points in the income distribution. Families near the top tended to do equally well irrespective of the president’s party, but families in the bottom 80% fared better under Democrats. Income inequality in the United States changed little over the period as a whole, as increases under Republican presidents were balanced by declines under Democratic presidents.

If we focus on the bottom 95% of the income distribution, as Bartels does, we observe a notable partisan difference in inequality trends and in patterns of income growth in the lower half of the distribution during this period. Contrary to Bartels’ conclusion, this partisan difference exists mainly for pretransfer-pretax income, suggesting that transfer and/or tax policy differences have not been a key driver. To the extent presidents have mattered, the effect seems more likely to have operated via union strength and/or the minimum wage.

To fully understand post-1970s trends in income inequality in the United States, it is critical to include developments at the top of the distribution, which Bartels does not do. If we turn to data that include the top 1%, we find only a weak association between president’s party and changes in inequality since the 1970s. Republican and Democratic presidents have pursued contrasting tax policies, and those policies appear to have made a difference for inequality. But their impact has been swamped by trends in pretax income. At the moment we know relatively little about the factors driving the dramatic increase in the share of economic growth going to those at the top of the distribution, and even less about what role presidents have played.

The following chart is, I think, the best representation of what’s happened since the late 1970s: 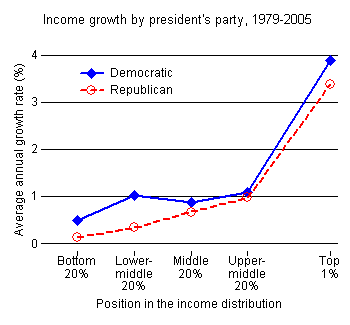 The full paper is here.

8 thoughts on “Presidents and Income Inequality”